DGP stands for Director General of Police in India. It is one of the highest ranks of a police officer which is given great respect in our country, India. A DGP is responsible for heading the union territory or state police force, which is known as the state police chief.

A director general of police in India holds 3-star ranks. They are appointed from the Indian police service by the Cabinet. If you will have a look at the rank insignia of a DGP, you will find an over-crossed baton and a sword as its national emblem.

The DGP’s can be identified from a distance as they wear gorget patches on their collar. It has a blue color background that has a pattern of oak leaf stitched on it. It is somewhat similar to the IGs and ADGs.

How an IPS officer can become a DGP? 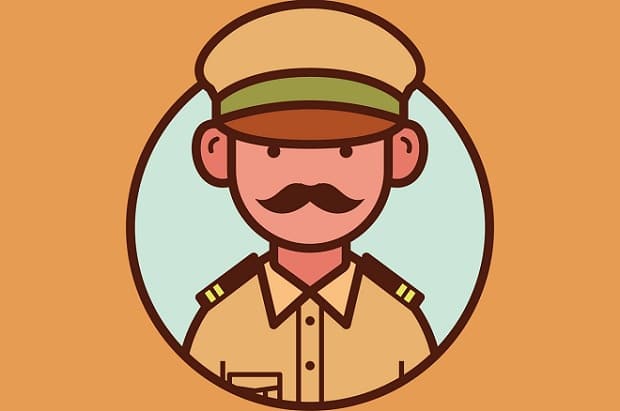 You must also know that DGP is the topmost and last post in the Indian police force. If you want to be a DGP, then you have to be an IPS officer first. It is because an IPS can also achieve this post with continuous promotions.

For becoming an IPS officer, you have to clear your UPSC exam. Such officers first achieve the rank of ASP, then SP, then DIG, SPL IG, and then DGP.

The officer is first listed based on their merit. This merit is based on the NPA exam. This merit list forms the complete basis for promotion, till the end of their service. The interesting fact is that, even though the IPS officers are of the same batch, but they are not of the same age.

One might have cleared the UPSC exam at his/her minimum age, and another one might have cracked at it at the last moment, and the other might be in between. The IPS officer who is the youngest one and senior-most in the merit list, they have greater chances of becoming a Director General of Police in India.

It is because even if others are senior to the young officers, they might attain the retirement age before the youngest officer.

For becoming a DGP, you need to clear an IPS exam first. There are two modes for IPS recruitment.

For a long period, there was an allocation of LCE (Limited competitive examination) for IPS recruitment. The union public service commission organizes the civil service examination for around 5-8 lakh candidates that appear every year.

The Indian police service examination is conducted in 3 stages:

What are the qualifications which are required to become a DGP?

For becoming a DGP, you need to be an IPS officer first. The candidates should meet the criteria set by the Union Public service commission and clear the Indian Police service examination.

The eligibility & qualifications to become one are:

Who appoints a DGP?

The DGP or Director general of police is chosen by the Indian police service’s Cabinet. She or he holds a 3-star rank.

What are the powers of a DGP?

The director general of police in India is the highest-ranking post. He/she gets various powers to enjoy during his/her tenure. It includes the following:

Salary of a DGP

A candidate never joins an Indian army just for the sake of salary; he has the passion to serve his nation. On the other hand, the government offers a handsome amount of salary to a DGP which is listed below:

The candidates who are willing to be a DGP must have any one of the educational qualifications listed below:

What is the age limit to become a DGP?

Facilities and perks offered to a DGP

A director general of police in India enjoys a wide range of benefits which includes,

Difference between Police commissioner and DGP (Director General of Police)

The DGP is a 3-star rank and one of the highest-ranking police officers in India. All the DGPs are IPS officers. The officers who are holding the rank of Director General of police may commensurate the appointments in CRPF, CBI, etc.

If you are willing to become a DGP, then you must work hard to become an IPS, serve your country as a good Indian police officer for the long term, then only you can be qualified to become a director general of police in India.

As a DGP, you will be having a greater responsibility to protect and serve communities, assisting various people in time, and also end crime. Moreover, you will earn the respect and appreciation by serving and protecting the people of India as a whole.

A career in Indian police is the best opportunity to make a good impact in the whole community while earning various benefits that come in the way. So the answers to your question as to why and how you should become a DGP are listed above.