Computer Science and Information Technology (IT) are the most common terms that a high school passed out students heard multiple times. Students find themselves in a very confusing situation while choosing the right career path between them. And it mainly happens because of the lack of guidance and proper knowledge in the high school years. But if you are highly interested in pursuing your career in the software development field, you must know these two career paths and what makes them different from each other.

It is where today’s post stands; actually, here we are going to talk about what computer science and Information Technology fields are, the similarities and differences between these two. We will be covering everything that you need to know as a student to pursue a safe career according to your interest. The different sections would be the valuable ones because, in that way, you’ll come to know which career path is perfectly suited for you.

First, let’s start this with computer science, here we will take a look at what computer science means and what you can expect if you don’t know anything about it. Without giving any chance to confusion to flow in, let’s first break down this term’s name. “Computer science” is the term that holds the full explanation in it; actually, it’s the science behind computers or computer devices.

The candidates study everything related to computers, every action, input, and output in computer science. Not only the theoretical part but also you’ll come to know about everything practically too. But most of the universities or institutions only focus on the theory part, and it is the responsibility of a student to implement those things for a better understanding of the concept. Everything you need to know is that you only need to follow two rules to understand the concept better while studying computer science.

Most of the universities or institutions would teach you the following things or subjects in Computer Science.

The well-known post in Information Technology is the IT professionals’. Right? Suppose you are into information technology or IT. In that case, you may know whenever a business faces a technical difficulty, or they want any other help related to computing devices. They usually call the IT professional to resolve the issue. So the conclusion is that a candidate or student learn the things about computers in the Information Technology career path that are highly important for the business to expand themselves with the help of technology.

Now let’s take a look at the very common question people or students usually ask regarding the difference between Computer Science And Information Technology. 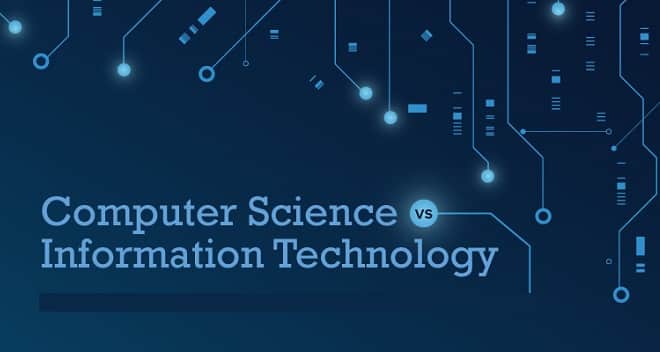 Is Computer Science is a hard career path as compared to Information Technology?

Actually, the answer to this question is nothing that we can tell you right away; it depends upon the scenario. Let’s understand it from an example; suppose there are two students, student A, and student B.

So, it is clear that there are nothing hard and easy things; it only depends upon the interest of a person who wants to pursue a study in which direction he/she wants. And if we tell him/her go opposite or his/her interest to learn or pursue something then definitely it would be harder for him/her.

But it is so true that the computer science field requires a wide range of knowledge about computers, programming concepts, computation theories, and mathematics.

As a computer science candidate, you must have the following skills: advanced programming knowledge, analytic skills, creative thinking, SQL, and software development.

And if you are pursuing any of these fields as mentioned above as a major, you would be eligible for some popular jobs in Computer Science. Below we will be listing some of the jobs that a computer science candidate can get.

For becoming a Software developer, you need to master the programming languages, and you must know to use the database combined with the application or software you create. A software developer is the most demanded job profile in the field of computer science. Talking about a software developer’s salary so that it could be anywhere between 60k to 110k dollars.

As you know that the websites’ world is expanding continuously year by year, and that’s why the Web Developers’ demand is also growing continuously, so it is also an in-demand job. For becoming a web developer, you need to master some web development languages to build an actual and fully functional website. Talking about a web developer’s salary in a private firm so that it could be anywhere between 50k to 80k dollars.

This job profile is more like debugging the system and the software, and if you want to become this type of tester or engineer, you need to have strong knowledge about the database and how everything works in the back-end. Talking about the salary, you can expect anywhere between 40k to 90k dollars as a software quality assurance engineer and tester.

If you have these skills as mentioned above as your major, it would be much easier for you to get a stable job in the Information Technology field. Below are some jobs that an IT candidate can get, and we will be covering everything you need to know.

You need to have essential skills like all the knowledge about computers and related to other computing devices for being at this job post. Talking about the starting salary can start from 50k dollars and go all the way up to 80k easily.

Businesses and private companies hire IT project managers to handle or get help in the team management related to computing devices or works. As an IT Project Manager, you can expect a salary of around 80k to 100k easily.

For being on this job post, you must have a good understanding of networking and computing devices. Businesses usually find people who can help them with networking skills, mainly to resolve device networking problems. As a network and computer system administrator, you can expect anywhere between 60k to 90k salary.

These were some of the job posts related to IT and Computer Science, and there are some other jobs like database management, computer system analyst, and computer system engineer that you can apply as both IT or CS candidates.

Both computer science and Information Technology are in-demand felids. Undoubtedly, pursuing one of these can make your career bright in the future, but selecting the right one is the actual problem. Right? If this is the case, then congrats; this whole detailed post was all about you; in this post, we have talked about computer science and Information technology in detail to let you know which one is the perfect suited for you.