If you are now considering pursuing a computational program, you should consider whether to choose Computer Science or Computer Engineering. We get it; it might be confusing. Additionally, when you are fresh out of your graduation or higher secondary education, it must be tough to choose. However, the clear idea between the two is what you should know early on. When you do, you will be able to focus a lot on all your goals and aspirations regarding the tech field.

But as there keeps increasing the number of saturated information between these two fields and the courses under them, it can be tough to deduce everything from the Internet. Other than that, numerous different computational programs are there to confuse you more. Therefore, we thought of focusing on Computer Science and Computer Engineering for you today. To shine some light on both these fields, we have all kinds of information for you.

In the end, you will surely be clear about which field and which program you want to pick. Let us discuss everything below –

What actually is Computer Science?

These subjects would surely be related to Operating System Principles, Algorithm Analysis, Software Engineering as well as Computer Architecture. There are many students who develop a keen interest in solving numerous and a variety of mathematics puzzles. All such students find Computer Science highly interesting. As you get to pursue a degree in computer science, you will get to understand many topics such as computer organization as well as many facets of its software.

Many experts describe Computer Science to be less hands-on and more abstract when compared to Computer Engineering. As you become a Computer Scientist after pursuing CS, you will get to focus hugely on mathematics, computational theory, and data structures, which will help you write all the effective codes. There are many popular fields and careers for a Computer Scientist, which include UI/UX Design, Software Engineering, Data Science, Web Design, and Machine Learning.

What is Computer Engineering?

Computer Engineering is unquestionably a field that will help immensely in focusing on the process of building devices. It is a well-known field that helps combine electrical engineering, physics, and computer science. Hence, in comparison to Computer Science, you will get to focus on the hardware of the Computer more than its software. Computer Engineering is closely related to engineering as well as physics. Therefore, it is more of a field which will help you build computers in general.

All those who wish to understand how all the things in a device work and also have the will to build something new will be benefitted from the Computer Engineering field. A Computer Engineer indeed works in the Physical World of Computers where his/her work revolves around understanding various laws of physics and additionally Electronics. They focus on creating better computer components so that the entire design of the devices could be improved and enhanced. Rather than writing codes, a Computer Engineer will spend more time on lab benches.

Topics such as computer hardware, computer software, and physics are extensively covered when it is about Computer Engineering courses. However, if you pursue this field, you will still need to develop top-notch programming skills. Therefore, the course will also widely cover the topics of software design. It is Computer Engineers who design the components of Computer, after all. Additionally, a Computer Engineer can work in fields such as robotics, life sciences, mobile device development, aerospace, etc. 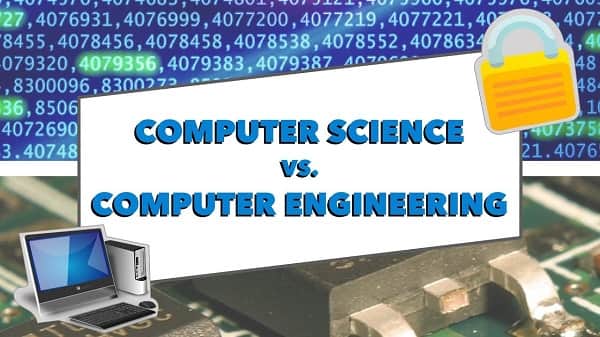 Even if you choose any of the two fields to pursue your career, you should be sure that you will land at a place with high job security. Both of these courses are known for years to offer the most in-demand and high paying jobs. Therefore, both the paths will lead you to the world of computers and how you can give your best to develop something that has never been developed before. However, the careers of Computer Engineers and that of the Computer Scientists will be a lot different. And hence, your choice should be clear. Otherwise, you will end up in a field that will not spark your interest like you believed it would.

Roles and Responsibilities of a Computer Engineer and a Computer Scientist

The most beneficial strategy which will help you determine what is right for you is knowing what the roles and responsibilities of the two paths revolve around. For instance, a person who wishes to work as a systems administrator or in cybersecurity would indeed find Computer Science to be the right way for them. If a person’s goal is to develop or architect the software, both paths help. However, building PC systems is something that Computer Engineers do. Here are the roles and responsibilities are known to be typical for a Computer Engineer and a Computer Scientist

Computer Scientists study the Analysis and Design of Algorithms. In this course, students understand how they can analyze the algorithm efficiency as much as they could. They also learn how to write code in the course, along with determining its efficacy.

An Introduction to Operating Systems is also a course under Computer Science that covers concurrent programming, resource management, and much more.

In Software Engineering, students learn how to create software solutions and understand topics related to team-based development along with engineering compromises.

Out of all the various Courses under Computer Engineering, we have Mechanics, where students get to learn Physics.

They also study Electric Circuits along with Waves, Optics, Thermodynamics, and General Physics.

Many experts believe that it is your interest that should drive you as you choose to pursue Computer Science or Computer Engineering. No course is better than the other as both of them allow you to have high-paying jobs which always remain and have remained in demand for decades. If you choose the field that you are not interested in, you will end up thinking that you have made the worst choice. Therefore, you need to understand what you wish to get from the course. Other than that, you should also know the field where you want to end up at. If you have that idea, you will get a clear understanding of where you would fit the most.