The Territorial Army officers serve for around 1-2 months every year. It is not a regular employment source or occupation. It is more of a part-time job. It also includes various entities that assist in various ways as:

What do you mean by Territorial Army India? 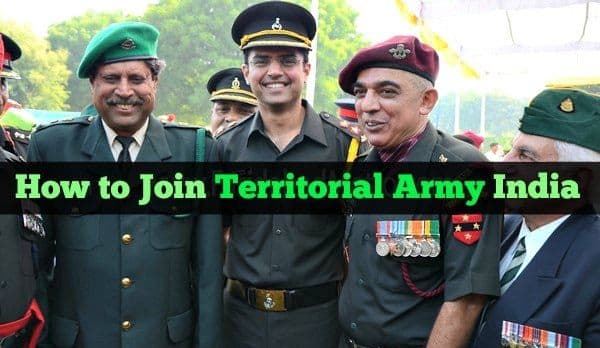 The Territorial Army is an amazing opportunity offered by the Indian government to young men that are doing well in their professional field. They are given a chance for joining the Territorial Army as an officer and complete their dream of wearing the uniform of an army officer. The best thing is that one can serve the nation in both ways, as a soldier, and as a civilian.

Moreover, you don’t have to quit your primary job or business, no matter whether you are working in any multinational company, in a government job, has your own business, etc.

Who can be eligible for a Territorial Army India?

Here are some eligibility guidelines that can help you know who can be eligible for a Territorial Army India position. This includes:

Note: The Territorial Army is not at all for the passed out candidates or someone that have 3-4 years of working experience. For being sure that you clear your Territorial Army examination, it is good that you get settled in your present job role first. If in case you have missed the daily entries due to your age, then it doesn’t mean that you can get hired for the Territorial Army position. All you need to do is, first fulfill all the eligibility needs and get employed properly, and then you can surely get shortlisted in the next round.

What is the selection process of the Territorial Army in India?

How an officer can get entry into Territorial Army?

For an officer to be a part of the Territorial Army in India, he has to clear 3 selection phases which include:

The selection for Territorial Army is based entirely on the SSB interview which is also known as the service selection board interview. Once you qualify for the written exam, you can get easily shortlisted for this SSB interview. It is very important to clear your written examination, SSB interview, and medical test which is done at the hospital of armed forces under the military doctor’s supervision.

For becoming an officer in Territorial Army service, you need to be a graduate in any stream from a recognized university or institute.

The age of the aspirant should be of 18 years and must not exceed 42 years. Some relaxation is offered in the age too. For knowing about the relaxation criteria, check the official site for getting exact details as it keeps on changing every year.

How to get a soldier entry into Territorial Army in India?

For being a part of the Territorial Army position as a soldier, you will have to clear 4 selection phases that include:

Short listing the candidates based on marks that are earned in the last qualifying examination.

Every soldier gets the training for at least 36 days which includes two training camps. Every year, the selected personnel is trained for 30 to 60 days with 1 or 2 camps and they are termed as the commissioned or annual training. The newly selected cadets are offered basic military training where they learn hand-to-hand combat and how to make use of weapons like pistols, rifles, etc.

All the selected officers receive the same training within two weeks of special post-commission training. The terms and conditions for soldiers and officers are kept the same for the training as it is followed for the Indian army.

All the soldiers and officers get training at their best level for handling and tackling every situation at the emergency time so that they can support and assist the Indian army well.

There is no fixed duty time for Territorial Army in India. As they are known as the 2nd line of defence, they can be posted on any location at the time of emergency or for supporting the Indian army.

Allowance and salary of Territorial Army in India

How you can apply for Territorial Army in India after XII

For applying for the soldier’s position, one can apply for Territorial Army after passing class XII if you are 18 years old or more.  For applying to this vacancy, make sure you keep on checking the official website of the Territorial Army where you can get the notification of online application forms and entries.

The Territorial Army of India also keeps on releasing the vacancies notification in local newspapers from where you can get the reminder to fill up its form. For more information related to vacancies and other things, visit the official website of the Territorial Army today.