This academy started in the year 1932 as per the Military committee’s recommendation. The ones who are willing to serve the Indian army as Indian officers must be aware of the whole selection process. This academy is responsible for training its graduates with the high-end standard of the Indian military.

The aspirants are trained for leading from its front. The training of ethical and moral values, technology use, and combat training in the present scenario is offered to the candidates. This IMA is having excellent facilities for helping the cadet in his all-over development.

The cadets of IMA can go on adventures in sports like Mountaineering, Trekking, Para jumping, river rafting, rock climbing, etc. After completing the IMA course, the cadets are ranked as “Lieutenant” position in the Indian army, for living up to the dreams to serve Indian motherland with the motto “Wisdom & Valour”. 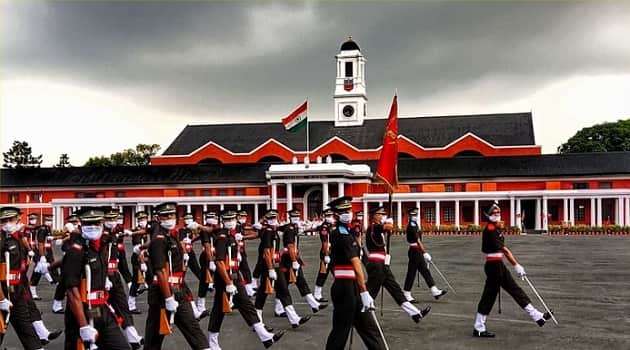 The aim of IMA training is the proper development of physical, moral, and intellectual qualities which are essential for great leadership in the army profession. The training at the Indian Military academy helps in inculcating the qualities of heart and mind, character, patriotism, dynamism, understanding, and initiative which are the basis of leadership in wars and peace.

How to join the Indian Military academy after XII

How to join the defence force after graduation?

The central armed police force of CAPF also offers different growth opportunities to the young defence candidates by working as an assistant commandant. The CAPF is known as the 5 security forces in India with a major role in defending the national interest against internal threats. Contrary to the operation and management of the Indian armed force, the CAPF is managed & regulated by the MHA, Indian government.

The top 5 ways of joining the Indian Military academy (IMA) are mentioned below:

The NDA exam is conducted by the UPSC (Union public service commission) twice a year. Only the male candidates that have cleared or preparing in class XII can choose their career in the Indian armed forces through this exam. Once you have qualified for this examination, you will undergo three years of educational training at the national defence academy of Khadakwasla and one year of military training at the Indian Military academy.

The combined defence examination is conducted by the Union Public service commission twice a year. Both the female and male candidates that have cleared their graduation or appeared can make the career in the armed forces. Only male candidates can join the Indian Military academy when they select the army as a preference. On the other hand, the female candidates can get the training at the OTA Chennai.

The candidates who are in their final year or have completed their B. Tech, BE in streams like computer science, electronics, civil, electrical, or mechanical can join Indian military service through the technical graduate course. The training duration is 1 year.

This is an option for all those candidates that want to apply to the army in their pre-final engineering year. You can have a look at the ads which are published in employment news or newspapers in June or May of every year.

One can join this soon after completing their post-graduation. The notification for this exam comes 2 times a year, in May or June and in November or December. One needs to have completed MA or MSC with 1st or 2nd division in the given subjects from a known university.

How to prepare for the Indian military academy examination?