Police are one of the most pervasive organizations in society. The policemen are one of the representatives of the government. Whenever there is a difficulty, crisis, danger, or even a need, when an Indian citizen is unaware of what to do, whom to inform, the policeman and the police station is the approachable and appropriate unit and an organization for all.

The police are expected to be the most dynamic, interactive, and accessible organization in every society. Their functions, roles, and duties in this society are natural and multifarious.

Moreover, the police are expected to maintain law and order. However, both these duties come with lots of responsibilities, duties, and powers for the whole police organization.

The DSP is next to the assistant police commissioner and can be upgraded to an Indian police service position after some years of service based on the state government rules. The examinations are also periodically conducted for recruiting police officers to their rank directly. 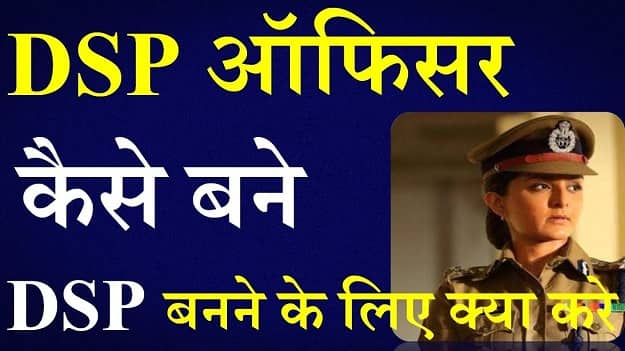 The inspectors are even promoted on this rank soon after completing few years in their job.

How to become Deputy Superintendent of Police in India

All those aspirants that want to be a DIG, they need to qualify for a state-level examination which is conducted by the SPSC. All those candidates that qualify for this SPSC exam can go through preliminary training prior to getting their position as DSP.

What are the requirements for the exam?

If you want to be a DSP, then you have to clear the civil service examination which is conducted by the UPSC (Union public service commission). This exam is conducted in three different phases that include the following:

Then you have to appear for the main examination which includes 9 papers of essay type. In this, you have to qualify for two papers, and only marks of 7 papers are considered.

Then you have to undergo a personality interview.

The selection procedure to become a Deputy Superintendent of Police

Employment Sector for a Police Officer

In India, the police department jobs fall in the category of government jobs. The recruitment of candidates for high posts like DSP is based on Indian police service exams.

Merits of being a DSP in India

How a DSP is appointed?

The BSPC is responsible for recruiting officers in the Indian police department. This highest rank which is given in the police department through Indian state PCS is the position of Deputy Superintendent Police. The post of DSP comes with a good salary, many other benefits, and a great amount of respect in society.

This job also comes with a good chance of promotion while serving the nation. However, the job of DSP is very challenging and the officer is responsible for managing all the work which is related to the police department in their jurisdiction.

Responsibilities of a DSP

It is not at all an easy job to be a DSP. This position comes with a lot of dedicated efforts and hard work for all the candidates. This post comes with numerous responsibilities and challenges as well. There are no fixed timings as the police officer has to be on the duty all the time.

A DSP is responsible for the maintenance of law & order in their area. They have to look out to none of the criminal activities are taking place and all the citizens are living in harmony and peace. If the DSP gets their posting in any of the sensitive areas, then he/she has to be highly alert as the crime rates are much higher in such areas.

Some other responsibilities of a DSP are listed below:

The DSP also has various responsibilities and duties based on which place or unit they are posted.

If he is a DSP in any of the sub-division, then he is in charge of two or more two police stations. His role is supervision, handling public grievances, Public relations, investigation, detection, and prevention of crimes, and much more.

He also has to fulfill his administrative duties like signing various documents. He might have a responsibility of handling the security of some important people even.

The recruitment notifications are published in websites, newspapers, and verified news channels of India. Thus, the candidates should keep themselves updated with all the latest government notifications so that you don’t miss an update.

With much amount of responsibility and maintenance of state law and order, this job comes with a good amount of salary and benefits.

A DSP can get pay around 9300-34800 with a grade payment of 5400Rs. The DSP also gets several benefits along with this salary which includes,

If you are the one who is dedicated enough to serve the nation and don’t want to do a 9 to 5 job, then you should consider making your career as a DSP. With this job, you will become a law enforcement officer that shares challenges and risks.

Apart from a handsome amount of salary, you will have the responsibility of saving lives and endless opportunities that offers respect. This is one job that will make you, your friends, and your family proud.