ITI fitter is a job-based training course. You will be able to learn how to learn about different kinds of fittings and how to fit them. It is a mechanical brand where you will learn how to fit various pipes, machines, and different structures. As this is a job-oriented course, the chances of getting a job upon completion of this course are very high. You will be able to find opportunities for this job from both the public sector and also private sectors.

At the beginner level, the pay scale is going to be slightly less, but when you keep gaining experience and add a few more courses to this ITI fitter course, based on the requirements of your company, you will be able to get promoted to a better position. When you get promoted, the pay scale is also going to increase. There are many institutions, both government and private, that offer this course. 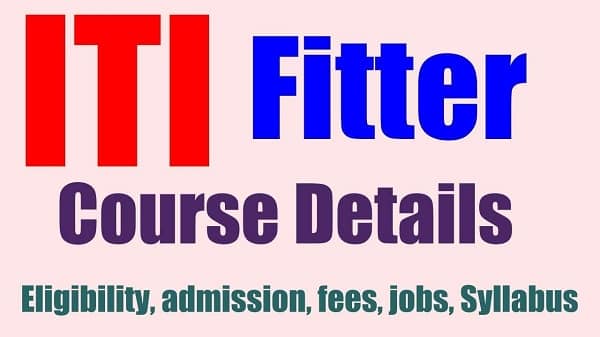 If you are having an interest in different kinds of machines and want to work on them, then this is the course for you. ITI Fitter will have work on many kinds of machines and their fittings. The course will first give you an overview of the safety precautions, and then you will be taught deep into the subject. The complete course details and other details are given below.

What is ITI Fitter?

the ITI fitter course is for fitting all the parts of a machine in the right manner so that it is perfect and ready to use or get assembled somewhere else. It is a mechanical branch, and usually, it is two years. But some institutions finish the course in one year. It depends on the type of ITI fitter course that you are choosing. To put it in simple words, an ITI fitter is someone who can fit the machinery, plants, and some mechanical products.

If you have cleared your 10th standard, then you are eligible to apply for the ITI Fitter course. If you are having higher qualification like Intermediate, then you should have Science and Mathematics as subjects in your intermediate to get eligibility for this course.

The candidate should be at least 14 years old to get enrollment in this course. There is no upper age limit to enroll in this course, and hence anyone who is 10th pass can give it a try if they are interested in machines. It is mandatory to have at least 40 percent marks in 10th standard.

Usually, this marks criteria of 40 percent may not be considered in most of the institutions like private institutes. But if you are seeking admission in a government institute, then you need to clear the entrance conducted by them. Each state has its entrance test for ITI fitter, and you need to clear it.

If you are planning to enroll yourself for the ITI fitter course, then you should first know about the various types of ITI fitter courses available. That will help you in making the right choice. So, here is the list:

The ITI fitter course is usually for two years, and it is divided into four semesters of six months each. You can go through the entire syllabus for two years here:

The Syllabus for all the semesters looks the same. But in the first semester, you will be given an introduction to each subject, and as you keep moving further, you will be given complete details of the subject. You will move one step ahead in every semester. Practical classes are also involved in each semester. For this course, practical classes are equally important, like a theory class. So, you should not miss any of them.

After the completion of the ITI fitter course, you will have to join a two-year course; it is good if you can join as an apprentice in any of the manufacturing companies to gain some in-hand experience. That way, you will be able to work better in the companies where you get hired in the future.

If you wish to continue your study further after ITI fitter, then the best option would be to get a Diploma by doing a Polytechnic course. A Diploma is also a technical course in various branches. You should always choose a branch that is related to mechanical engineering. The best part about it is you will be able to get admission into the second year directly, and Diploma is a three year course. But if you want to pursue a normal degree course, then you have no other choice than getting admission into 12th standards.

When talking about career opportunities, you have two options to choose from. You can directly apply for a job in a private sector company. But if you are looking for a job in the government sector, then you will have to wait and prepare for the entrance tests conducted by them. You will have an entrance exam to pass for any government sector job.

The job opportunities you will get are:

The average salary package of ITI Fitter and job role

Now comes the best part of getting enrolled in ITI fitter, and that is how much you are going to earn once you are done with the course. The salary is always dependant on the company where you get placement. If you are going for an apprentice, you will earn between 5,000 to 8,000 per month. But when you get hired permanently, your salary is going to increase. Some people even settle in foreign countries after completing a course in ITI fitter. It has a lot of job opportunities, and hence you need not have to worry about it.

This is just a small list of colleges. There are many other institutions, both private and government. You can check the complete details of the colleges and enroll yourself in one of the best institutions.

No, the curriculum and syllabus of each ITI fitter course are different, remember, there are four different types of ITI fitter courses and each of these courses specializes in a specific field, therefore, the syllabus and curriculum of the course also differs. However, there are some common subjects like an engineering drawing, hydraulics, measurement, drilling, etc.

Yes, the full form of FITTER is Foundation of Industrial Training and Technology Resources. From the full form, you could understand the essence and purpose of the course. Most people are not aware of the fact that FITTER has such a full form.

Yes, of course, ITI Fitters could find a job in both the private and public sectors. However, there are some job titles in railways and electricity boards that are open for only ITI Fitters. If your candidate has completed an ITI fitter course, then you should keep checking the Indian railway’s website for the right opening. Most commonly, there would be around 250 vacancies every year for ITI fitters. In the same way, each state’s electricity board also has such requirements.