Today, information is considered to be money. The systems can capture a lot of data than ever, and the storage doesn’t have any limit either. You can store terabytes of data, and it can be processed to get valuable insights about customers, the behaviour of the users and patterns. The data can be decoded with the help of complex algorithms, and there are a lot of us who love to decode such data. Two new designations available is that of Data Analyst & Data Scientist. These are the hottest jobs in terms of the pay as well as tech. These two jobs are one of the best options for people who are looking for a lucrative career option in technology.

As per some of the studies, the industry would need approximately 2.7 million people in Data Science & Analytics Job. The positions in this field are not easy to fill either. As per an industry report, it takes an average of 45 days to fill a position in DSA role. This is longer than the industry average for other roles. Many people get confused about data analytics and data science roles. They perceive these two roles as similar to each other, but the fact is that there is a massive difference between the two roles.

What is the meaning of Data Analyst & Data Scientist? 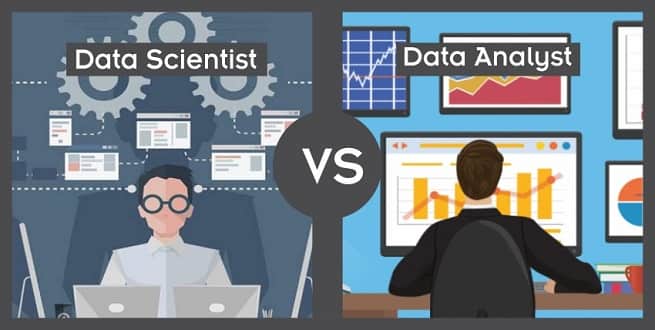 Below is the definition of data analyst & data scientist. Check out the details now.

Data Analyst – Data analyst is the people who go through the data to analyze the trends. They try and find out the story that is being told by the numbers. Data Analyst tries to make sense out of the numbers available to them. They even do the trend analysis, and they see if any critical business decision can be made based on the data available to them. Data analysts are also responsible for representing the data visually and displaying them in an easy to read format for different departments in their organization.

Data Scientist –Data Scientists not only interpret the data, but they also have expertise in the field of mathematical modelling and coding. Data Scientists usually hold an advanced degree in this field, and usually, this is the next step on the vertical horizon when someone is working as a Data Analyst. Data scientists also know about machine learning. They can easily create processes for data modelling. Often, they would use their programming skills to condition data as per their needs. Data scientists often work on the predictive models too, and those models can help them in defining the trajectory of the future.

What Does a Data Analyst Do?

What Does a Data Scientist Do?

Moreover, the patterns can help them in analyzing the impact of various other factors as well. These patterns are also useful in deciding the production capacity for the next few months. Overall, the data scientists provide insights which help in taking managerial decisions.

You can check out the typical qualifications that you would need to become a data analyst. Go through the details now.

You would have noticed that the bars for the data scientists are relatively high, and they need to have a lot of experience as well to perform as a data scientist.

Data Analyst vs Data Scientist: Difference between the pay scale

The salary of a data analyst would vary from one country to another. There would also be a lot of variances when you look at the different industries. Getting into the details, the average salary of a data analyst in the United States is $ 84,000, whereas a data scientist would earn $162,000 annually. Right now, the data scientists are in scarcity, and there are fewer people when compared with the requirement. This is also one of the reasons why the salaries are so high. Maybe in future, the market would correct itself once the demand equals the supply. This is an uncertain area, and it would be worth seeing what the future holds for the data analysts and data scientists.

One thing is assured that the demand for the data analyst and the data scientists would never fall. The demand would always be on the rise, and people with in-depth knowledge will be able to benefit from the trend. A data scientist certainly has a higher salary, but it takes specific years of experience to reach that place. If you are presently pursuing your graduation, then you can prepare yourself in advance. You can opt-in for additional courses that would teach you this trade. In addition to this, you can also start taking up freelancing project once you have gained knowledge of the field.