Some people are not born to spend 8 hours in front of the computer and go back home. They have a desire to serve the country, and to do something that commands massive respect. These people believe in doing something different, and since you are here, we assume you are among one of them. A lot of students wish to join Indian Army, Indian Air Force, and even the Indian Navy. Are you also willing to join Indian Air Force? If so, then you are at the right place as this page is all about the process of joining the Indian Air Force.

We understand that there is a lot of confusion when it comes to joining the Indian Air Force. You might be willing to know about the eligibility criteria, qualifying exam, and the best way to prepare for the exam. In today’s article, we will cover all the details. We are also going to share some insights into the life of an officer serving the Indian Air Force. For the next 15 minutes, leave whatever you are doing, and concentrate only on this post.

You can grab a notebook a pen to take down some of the points from this page. These points will help you in preparing for the next step. Be assured that if you are choosing Indian Air Force, you are choosing adventure, excitement, and challenges over the monotonous office job. Let us get started and share the details now.

How to Join the Air Force after 12th?

You will have to choose the route as per the final destination. The first thing that you need to answer here is if you would like to join the Air Force as an officer or as an Airmen. It should be noted that the eligibility criteria for Officer would require you to have a particular set of educational qualification. If you are planning to join as an officer, then you must have Non-Medical Stream in Class XI & XII. Moreover, you need to have Physics & Maths as compulsory subjects. You would also need to appear in NDA or NA Exam. We have shared the detailed routes for joining as an Airmen or an Officer in the section below. 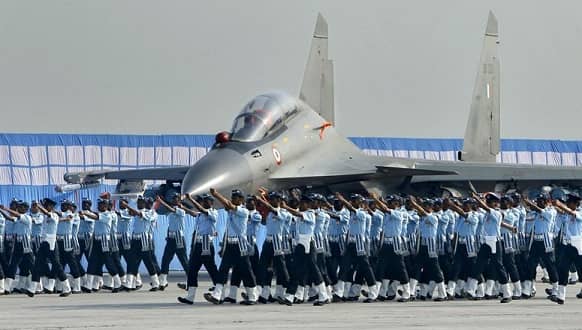 Joining the Air Force as an Airmen after 12th

If you have decided to join the Air Force as an Airmen, then you can apply after class 12th. In this case, you are supposed to go through the Joint Basic Phase Training, which is also known as JBPT. You will have to go through medical, physical, and visual evaluations. A trade or a field will be allocated to you according to your performance in JBPT & your educational qualification. It should be noted that you will be given one of the two groups listed below.

It should also be noted that the basic combat training will be given to you irrespective of your trade.This also includes basic discipline, educational training, weapon training, and manner. Parade, games andPhysical Training is an integral part of training for any person serving the Indian Defense Forces. You will find yourself involved in such activities too.

Joining Air Force as an Officer after 12th

If you are planning to join Indian Air Force as an Officer, then you would need to appear in NDA & NA exam. The male candidates who have cleared class XII with Physics & Maths are allowed to appear in the exam. After you have been shortlisted in NDA, you will have to go through rigorous training at National Defense Academy. After the basic training, you will be enrolled for specialised training according to the field given to you. After the completion of training, you will be commissioning in Air Force as a Permanent Commission officer, and you will be posted at one of the Air Force Stations.

As mentioned above, you need to appear in the NDA & NA Exam. In this section, you will find all the details about the examination. Before you go ahead, let us mention that the NDA exam happens semi-annually, and it is hosted in all the major cities of India. Millions of candidate appear for the exam, but only a few hardworking candidates get selected for the serving the nation. More details about the Eligibility Criteria are listed below.

Eligibility Criteria – The candidate should be eligible for undertaking the NDA & NA Exam. He should be meeting the eligibility criteria advertised in the advertisement. Find out more information below.

Advertisement Schedule – The advertisement for the NDA & NA exam is released by UPSC, and it is done in January & June. You can also visit the UPSC Website to check out more information about the advertisement schedule.

Gender, Age & Marital Status – There are certain restrictions associated with the gender, age, and marital status of the candidate. It should be noted that only males are eligible for examination, and the age of the candidate should be between 16.5 years, and 19.5 years. In addition to this, you should be unmarried while appearing for the exam. You will have further restrictions, and you will not be able to get married until the course is complete.

NDA exam is the most crucial step for the application to Indian Air Force. This will be your first chance to get through the selection criteria. Once you have cleared the written test, you will be called for an interview in the Service Selection Board. If you manage to crack the SSB interview, then you will have to go through the mandatory medical test. Finally, you will be admitted to the esteemed National Defense Academy. You will also have to appear before the Air Force Selection Board, and Computerised Pilot Selection System to get into the Indian Air Force.

The exam is hosted in April, and November every year, and all the details about filling the form, and written exam are available on the website. To give you some details, the exam consists of two sections. One of the section has a Mathematics test, and the second one has the General Ability Test. Total marks carried by the exam are 900, and the cut-off varies every year.

If you have missed the chance to appear for NDA, then you have a second chance. You can get into the Short Service Commission as well. It is also possible to join the Indian Air Force after completing graduation. You can check out the details in this section.

If you are in the final year of graduation or if you have completed your graduation, then you can apply for the Common Defense Service Examination. This examination is also conducted by UPSC, and it is conducted twice in the year. You should be between the age of 20 & 24 years. In addition to this, only single men are qualified to apply for the exam. Even in the case of the CDS, the process remains the same. You will have to go through the written test followed by the Air Force Selection Board, and Medical Examination. If you are doing a three year course, then that should be completed from a recognised university.

Not many people are aware of this, but apart from CDSE, you can also join the flying branch through NCC. If you are an Air Wing Senior Division Certified in the National Cadet Corps, then you can join the Indian Air Force. This route is open for men & women, and it is a short service commission job for you. The age barrier here is between 20, and 24 years. The marital status of the applicant should be single. Apart from this, you would need have scored at least 60% in Maths & Physics in 10+2 as well as graduation. Post selection at first level, you would have to appear for Air Force Selection Board& Medical Examination too.

AFCAT is yet another way to get into the Air Force. The exam is held semi-annually. You can appear in the exam in February & August. The application for the same is released in December & June respectively. This exam is also conducted across India, and the applicants who are between the age of 20 & 24 are eligible to appear in the exam. Men & Women are eligible to appear in AFCAT, and they should also not be married. The minimum qualifying marks required in graduation & 10+2 is 60%. In AFCAT, the core areas of the test include General Awareness, Numeric Ability, Verbal Ability, and Military Aptitude Test. After clearing the exam, the candidate would have to go through Air Force Selection board and Medical Exam.

We have covered all the possible information about getting into the Air Force. It is certainly a matter of pride to serve the country. You can check out the compensation, and benefits available for the Air Force pilots, and all the details are available in the advertisement for Air Force. Getting into the Air Force will help you in building a strong career. A career where you get a chance to grow personally as well as professionally. You will also beable to participate in adventure activities like scuba diving, paragliding, skydiving, and any more. If you need more help, you can reach out to us, and we will try to guide you in the best possible way.