Before explaining how to join NDA, you must understand first what is NDA and why is it important to the Indian Armed Force. A candidate must know everything about NDA before planning to set a goal to peruse a course in  NDA.

National Defence Academy (NDA), yes, most of the people who are reading this article would know this, however, do you really know, what NDA does and why is it important?

National Defence Academy is not like any other universities or colleges, this one is a joint services educational and training institution of the Indian Armed Forces. This institute is situated in Khadakwasla, Pune.  Unlike all the other institutes in India and around the world, the NDA is the only one institute that offers military training to candidates planning to peruse a career in the Indian Army, The Indian Navy and The Indian Air Force. The NDA is the 1st and the only current Tri-service military institution in the world.

The foundation stone for this institute was laid by Nehru in 1949 and the academy as we know it today was fully established in 1954. The NDA offers UG courses in such the candidates are provided a bachelor’s degree after a period of 3-years of training. This does not mean, the candidate does not have the option to select any stream. The candidates enrolled in this institute could choose the science stream or humanities. The science stream would include subjects like physics, computer science, chemistry, and mathematics. The humanities stream would include subjects like political science, geography, economics, languages, and history. 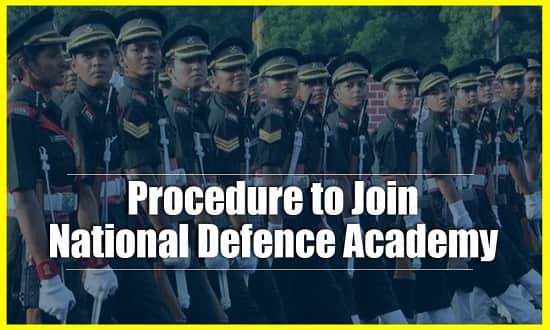 When it comes to NDA, it is different from all the institutes and universities in the world. The eligibility criteria itself is very diverse and a bit complex.

To attend the NDA exam, the applicant should satisfy the criteria listed below. If the applicant’s data does not match these eligibility criteria, he/she could be barred from attending the exam.

Any other candidates and Gurkha subjects of Nepal should produce and submit, the certificate of eligibility issued by the Indian government.

The qualification eligibility criteria for each branch of the Indian Armed Force are different, they are as follows.

For the Indian Army –

For the Indian Navy and Indian Air Force –

The physical standards to apply for the NDA exam is diverse, there are one of two pages of physical standards. However, for applying for the exam, these standards do not matter, but, if you crack the exam, and join the NDA if you do not have these physical standards, then you could be thrown out. Remember, once you are thrown own, resigned, or withdrawn from a training academy of the Indian Armed Force, there is no second chance. You will be ineligible for a second try.

These are some of the common physical and visual standard eligibility criteria, there are more than the ones mentioned above, however, mentioning each one of them could be waste of time.

Now, you know all the details related to NDA and eligibility criteria. Here is how to join NDA.

How to join NDA?

The admission to NDA is not open for direct admission or any other methods. The selection process is always done through the methods mentioned below.

NDA offers, three different UG courses, BA, B.Sc., and B.Tech. the candidate could peruse any one of the UG courses. BA and B.Sc. do not have any specializations, but, when it comes to B.Tech. a candidate could peruse, mechanical engineering, computer science & IT, communication engineering, and applied electronics. If you need to join the Indian Air Force, you need to attend and pass the Pilot Aptitude Test.

As already mentioned, admission in NDA cannot be acquired without attending and passing the NDA & NA entrance exam. The NDA & NA exam is conducted by the UPSC. Once you pass the entrance exam, you will have to attend the SSB interview.

The service Selection Board interview is a 5-day long process that is scheduled based on the rank secured in the entrance test. The SSB interview is split into two stages.

This stage is commonly referred to as the screening round where the candidate has to attend 2 tests, OIRT (Officer Intelligence Rating Test) and PPDT (Picture Perception & Discussion Test). These two tests consist of a question that could evaluate the candidate’s reasoning, intelligence, and general aptitude. The stage 1 screening round is commonly conducted on the first day of the SSB interview.

In the remaining 4-days of the SSB interview, stage 2 is conducted. Only candidates who have qualified the stage 1 could move to this stage. Stage 2 consists of 5 different tests.

The candidate has to qualify for all these 5 exams, failing even in one exam is not accepted.

If the candidate qualified for the medical examination and all the other tests, he/she could move to the next round.

Final selection would be done based on all the 3 rounds, the entrance exam rank, SSB interview result, and the medical test outcome. If the result of all these rounds are favourable and meets the criteria set by the commission, then he/she will be asked to appear for the document verification process.

If you are on the list after the final selection process, then you need to appear before the commission for document verification. Here are the documents that you need to present before the Service Selection Centre (SSC).

The candidate needs to present the original documents and also carry more than one copy of every document. If you fail to submit or present any document, you could be disqualified.

Once you have successfully submitted all the required documents, you will be notified of your admission to NDA.

How to apply for NDA & NA entrance exam?

To apply for the NDA & NA entrance test, you need to visit the official website of NDA or UPSC website. Here are the websites for both.

Stay tuned to these websites to keep track of the application process.

It is not an easy task to get admission in NDA, the demand for seats is very high as all the three branches of the Indian armed forces draw candidates from NDA. If you do not secure a competitive rank in the entrance exam, it could be hard to get a seat in NDA.